The city of Albi is in the département of the Tarn in southwest France and is an hours drive south from Saint Antonin (via Cordes).

It has become synonymous with the Cathar heresy and the Crusade of Innocent III which attempted to wipe them out.

In 1145, Bernard of Clairvaux - the charismatic inspiration behind the remarkable expansion of the Cistercian order - came to Languedoc to preach against heresy. He was received with contempt by the inhabitants of Albi and left with their disdain ringing in his ears. They built the cathedral to celebrate the extinction of Catharsism.
Apparently an architect persuaded the french revolutionaries to preserve the cathedral in it's opulent state to serve as an example of the pre revolutionary decadence so it is much more decorated than normal. 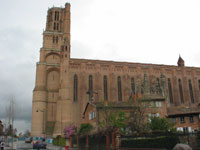 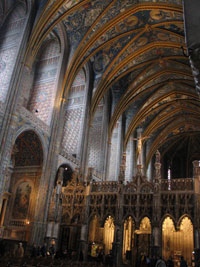 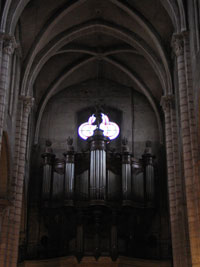 See also the Toulouse Lautrec museum and the old town with it's trendy boutiques.